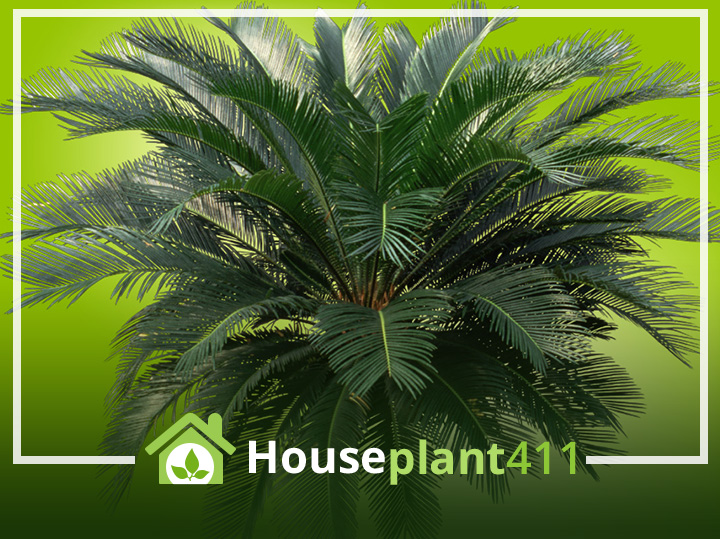 A Sago palm, Cycad, is not really a palm at all; and although it resembles a true palm, it is not even a close relative. These plants are a type of gymnosperm and relatives of conifers and gingko trees. Cycads, often called “living fossils,” are one of the oldest most primitive plant families and have not changed very much in the last 200 million years. A Sago palm has several common names such as King Sago, Sago Cycad, and Japanese Sago Palm.  An interesting fact is that although these plants produce nuts, they never produce flowers or fruit. The only Sago palm sold as an indoor plant is the Cycas revoluta.

A Sago Palm has a very rugged trunk 1”- 12” (2.54cm – 30.50cm)  in width depending upon the age of the plant. The trunk is topped with stiff, somewhat narrow, long, arching fronds that grow in a circular or rosette pattern. Be careful to avoid being stuck by the sharp, needle-like tips of the fronds. This is a very elegant, slow growing plant and often produces only one new frond per year. Although outdoors a Sago palm can reach a height of 6ft. (1.8 m), indoors a mature Sago palm, after five or six years, is still only about 2ft – 3ft tall (.6m-.9m).

This plant grows well indoors if you keep a few things in mind.

Use  a sandy soil that drains quickly.

A Sago palm likes to be warm and grows better in high humidity.

A Sago palm is toxic to cats, dogs, and humans. Read more about common houseplants that are poisonous in Don’t Feed Me to Your Cat: A Guide to Poisonous Houseplants.

How much light for a Sago palm: A Sago palm needs bright light with a little direct sun in the morning. Direct afternoon sun burns the leaves. Give a Sago palm a ¼ turn each week to keep it from growing toward the light. In bright light a Sago palm produces short thick fronds, in lower light the fronds are long and narrow.

How to water a Sago palm: A Sago palm is fairly drought resistant plant. It is more harmful to the plant to over water and cause root rot than to under water. Allow the top 75% of the soil to dry out before thoroughly watering a Sago Palm. Be sure the water comes out the drip holes in the bottom of the pot, but do not allow the plant to sit in the excess water. Water sparingly in the winter when there is less light and cooler temperatures. Be careful to never get water in the crown of a Sago palm, this can cause Crown Rot disease and the eventual death of the plant. Sago palms should never be allowed to totally dry out.

How to fertilize a Sago palm: Feed a Sago palm monthly from spring through fall with a liquid fertilizer (18-6-18) diluted to ½ the recommended strength. To avoid leaf tip burn, be sure the spot of the plant is slightly damp when you fertilizer The fronds of a Sago Palm shrivel and dry up if it has been over-fertilized.

Best temperature for a Sago palm: Sago palms prefer warm temperatures between 60°-75° F (16°-24° C). They still survive in temperatures as low 45° F (7.2°C) but do not grow at all. Avoid putting a Sago palm near heaters, air conditioners, or cold drafts. These plants do not like severe temperature fluctuations.

Humidity for a Sago palm: A Sago Palm likes high humidity so you may need to place a humidifier near the palm if the air in your home is very dry. Although Sago Palms can survive in low humidity, they do not grow well or look very good.

Does a Sago palm flower: Although a Sago palm produces nuts, it does not produce flowers or fruit.

Sago palm plant diseases: Be careful not to get water on the center crown of the plant where the leaves emerge. Crown Rot plant disease occurs when water gets on the crown of a Sago palm. There is no treatment for Crown Rot and the plant often dies. Root rot caused by over watering is the mail reason an indoor Sago palm dies.

What size pot for a Sago palm: The roots of a Sago palm do not like to be disturbed, so repot only when the plant has totally outgrown the existing pot. You can control the height of a Sago palm by keeping it in a small pot.

How to prune a Sago palm: Remove dead or damaged fronds that have turned completely brown from a Sago Palm by cutting them off at the very bottom of the plant.

How to propagate a Sago palm: Mature Sago Palms produce offsets, called pups, which are used for propagation. When you remove a pup from around the base of a Sago Palm, be sure to take all of the leaves and roots. A sago palm can also be propagated by plant division. Read more about both of these propagation methods in the Glossary of the website.

Is a Sago palm a poisonous plant: A Sago palm is a very poisonous houseplant with a #4 level toxicity. All parts are poisonous, especially the seeds. Keep a Sago palm out of the reach of children, dogs, and especially cats who love to play with the fronds of the plant.

My Sago Palm Finally (After Many Years) Produced Pups. Now What Should I Do?

First remove the pup with all of its leaves & roots. Set it aside for a week so any cut areas can dry out. Gently plant the pup in a small pot of loose quick draining soil or cactus mix; 1/2 the trunk should be below the soil level. Water well. Almost all of the soil should be dry before you water again. Place the new plant in a bright area in your home or a shady area outside. Be patient, it may be several months before any new leaves appear.

My Sago Palm Just Sits There and Doesn’t Seem to Get New Leaves. Should I Feed It More?

Sago Palms are very slow growing plants . They do not constantly add new fronds. Sagos do eventually produce what is called a “flush” of new leaves. This is called a “break”. These new leaves are very fragile and easily damaged during the first few weeks. Feeding it more will only burn the existing leaves.

The Leaves on My Sago Palm Are Turning Yellow. What Am I Doing Wrong?