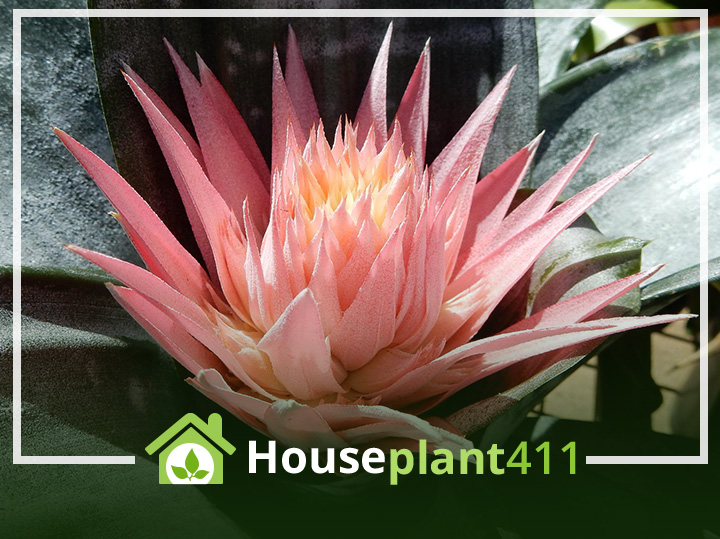 A Bromelia fasciata (Silvr Vase Plant) requires very bright light in order to flower. Once the pink bracts appear, move the plant to lower light to prolong the colorful bracts.

Keep the “cup” of this type of bromeliad filled with fresh water. Clean the cup weekly and replace the water with clean water to prevent diseases, gnats, and mosquitos. Dampen the soil and do not water again until the top 1/2” of soil has dried out. Never allow the soil to totally dry out and never use hard water. The lime in hard water disfigures the leaves. These plants have a very small root system so be careful not to over-water.

Feed monthly in the spring, summer, and fall with a liquid plant food diluted to ½ the recommended strength. During the winter, fertilize a every other month. The best way to fertilize is to spray the liquid food directly on the leaves. Never put food into the central cup.

The colorful bracts last longer if you keep the temperature between 6o°-75° F (17°- 24° C). Aechmea fasciatas can survive colder temperatures than other bromeliads.

After three or four years, once the plant matures, a bromeliad archaea fasciata produces a tall flower stalk with numerous pink bracts. The real flowers are small blue blooms that grow between the bracts. Although the tiny blue flowers quickly die, the bright pink bracts often last for 5 or 6 months when the temperature is cool and the light low.

Change the water and clean the cup every 7-10 days to prevent plant pests such as gnats, mosquitos, mealy bugs, and scale.

I recommend using either a bromeliad or orchid potting soil. If you want to make your own mix, use equal parts leaf mold, peat moss and coarse sand or equal parts fir bark, peat moss, and sharp sand or perlite.

As the young bromeliad matures and outgrows a 4” or 6” pot, move it to the next size pot in the spring. After 3 or 4 years, the plant reaches maturity and should remain in an 8″ pot. Bromeliads like to be root-bound in small pots so don’t rush to re-pot them.

Bromeliads are propagated using the “pups” or offsets that grow around the base of the plant. Wait until these offsets are about 6” (15 cm) in size before digging them up and planting them in a 4” pot of their own.

Bromeliads remove formaldehyde from the air.

Although considered a non-poisonous houseplant, a bromeliad contains substances that may cause skin irritations and contact dermatitis in some people and pets.

What Are the Rust Colored Bumps on the Underside of My Bromeliad Leaves? There Are Also White and Light Yellow Spots on the Upper Sides of the Leaves.

I Bought a Beautiful Bromeliad Fasciata With a Lovely Pink Flower. Why Did the Flower Die and How Can I Get My Bromeliad to Bloom Again?

The bright pink flower on a Bromeliad fasciata is really numerous bracts. These bracts begin to fade and die after a few weeks to a few months depending on how long the bromeliad plant had those bracts before you purchased the plant. Hopefully the plant will produce some off-sets you can use to start new bromeliad plants.

The Bromeliad in the Store Had Beautiful Long, Drooping, Silvery Leaves. I Started a Bromeliad Plant From Some Offsets of My Mom’s Plant but the Leaves Are Short and Lack the Pretty Gray-silvery Color. Why?

In order to get your bromeliad leaves to have that silvery gray color you need to put it in very bright light and fertilize more. Feed a bromeliad fasciata monthly in the spring, summer and fall with a liquid plant food at ½ the recommended strength. During the winter, fertilize every other month. The best way to deliver plant food is to spray the fertilizer on the leaves. This helps the color, but not the size of the leaves.